Van Zee Enterprises started as Rock Valley Cement Block and Tile by Conrad H Van Zee. Conrad’s sons Henry, Richard, and Alvin purchased the business after Conrad’s death in 1945. During the next few years, the business expanded into the sand and gravel industry.

In the 1950’s, the brothers formed several partnerships under the business name Ready Mix Concrete Co. It was dissolved in 1961 as the Van Zee brothers bought out their partners interests. In 1967, Alvin passed away. Richard (Dick) and Conrad, sons of Henry bought their first interest in the company until he retired in 1972. They became sole owners when Richard retired two years later.

In the 1970’s to 1990’s Tri-State Ready Mix was started and added plants in Canton and Beresford, South Dakota and Rock Rapids, Iowa. The company also started to manufacture precast concrete products such as feed bunks, well curbs, and hog slats. In 1997, Conrad and Dick decided to retire and sold their shares to Chad and Mike.

In 2002, Chad and Mike reorganized the company and created the new parent company Van Zee Enterprises with division names Valley Sand & Gravel, Tri-State Ready Mix, and Rock Valley Precast. In the next few years they would purchase Top Construction from Steve Van Den Top, and the tankers from Tri-State Ready Mix were transferred to their own company becoming Material Services, Inc. In 2014, Northwest Excavating was purchased from Brian Vander Pol.

Van Zee Enterprises has developed into what is now an incredibly successful provider of concrete, sand and gravel, and pre-cast products delivered across Iowa, South Dakota, Minnesota, and Nebraska.

Expertise you can depend on 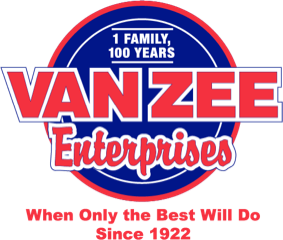 YOUR PROJECTS,
OUR PRIDE